We are here to help!

Can I run a report on nominations?

The Nominations reports display the open and closed Ticket nominations.

Every sub-contractor or team member that has been nominated is listed below this chart with the number of nominations captured against each.

Your users have the ability to send a PDF or Excel file of this report by clicking on the icons in the column as below.

1. Showing a Nominations report for Sub-contractors with the top 10 nominated contractors for open nominations.

You can also run a report to show any sent nominations to a contractor or Team Member that have not been actioned.  This is called the Outstanding Nominations Report. 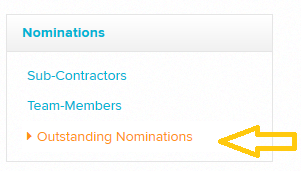 This can be filtered by scheme, region, contractor, team member and date range.  It can also be exported to PDF or Excel.

Did you find it helpful? Yes No

Can you please tell us how we can improve this article?